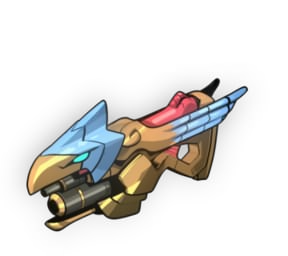 Exagryph, the Adamant Rail, is an Infernal Arm that can be unlocked for 8 Chthonic Keys after all other weapons have been unlocked. It is a ranged weapon modeled after a repeating rifle.

The Adamant Rail's primary attack fires bullets rapidly out of an ammo cache in the direction Zagreus is looking. These bullets do not stagger enemies or cause them to flinch, and they deal low damage. Zagreus is immobile while firing.

When the Rail is out of ammo, it must be reloaded. It will reload automatically when out of ammo, or a manual reload can be triggered with the "Reload" action.

The Rail's special attack is "Bombard". Using it targets an area around the cursor and launches a large grenade at it. After a brief delay, the grenade will hit the targeted area, dealing massive damage to enemies within the blast zone.

The Adamant Rail has 3 Aspects: Zagreus, Eris, and Hestia. Like all other weapons, each Aspect has 5 levels that can be unlocked by spending Titan Blood. An Aspect will not only change the appearance of the Adamant Rail, but will also improve its attacks. The higher the level of the Aspect, the more effective its improvement is.

These are all the upgrades the Adamant Rail can receive when using the Daedalus Hammer. Some upgrades are mutually exclusive, and cannot be combined with each other.

Daedalus Hammer upgrades for the Rail can either change its "Fire" (Attack) pattern, add new effects to the Rail's bullets, or change its "Bombard" (Special) attack pattern.