From Hades Wiki
Jump to: navigation, search
This article is a stub. You can help Hades Wiki by expanding it.

Athena is the Olympian Goddess of wisdom and strategic warfare. She offers boons to Zagreus that cause his abilities to Deflect enemy attacks. In addition, she also offers boons that reduce damage or increase other defensive options.

Athena offers excellent defensive options with her boons, protecting you from damage with the ability to deflect enemy projectiles and melee attacks, as well as reduce the damage you will take in a run.

Her signature Status Curse is Exposed, which causes enemies to take additional damage from behind. This stacks with Backstab bonuses offered by the Mirror of Night.

As her boon is the reward for clearing the very first room in a fresh save, she will always be the first of the Olympian gods to be encountered.

If given Nectar, Athena will give you the Owl Pendant.

Many of Athena's boons add Deflect to your abilities. Deflect is a mechanic unique to Athena boons which allows an ability to repel projectiles and damage back at the attacker. A projectile hit with a Deflecting ability will be sent back towards the enemy who cast it, and deals a portion of the enemy's health instead of its base damage. A well timed Deflecting ability can also negate a melee attack, dealing damage to the attacker instead.

(Note: Portion of damage not known. It doesn't appear to be eight times the base damage at least in every case. Needs verifying.) 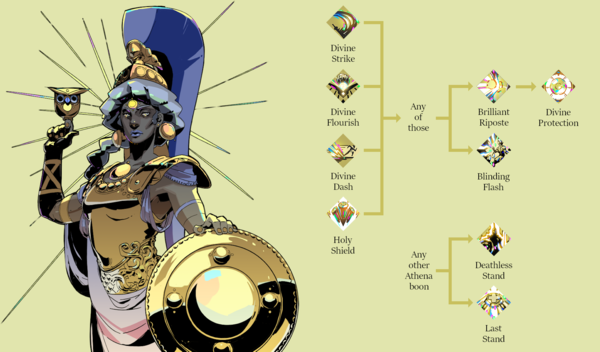 Graphic which displays what boons are required for other boons to appear from Athena rewards. Image by HeartfulPeach.

For additional information on Athena that does not pertain to Hades, see Wikipedia's article: Athena