Bouldy is Sisyphus' boulder and constant companion. As his punishment for cheating death, Sisyphus is forced to push Bouldy up a hill constantly, only to have it roll back to the bottom, repeating this process for eternity. Over time, however, Bouldy has become something of a confidante for Sisyphus rather than merely a source of unending torment.

Although Bouldy cannot be gifted Ambrosia, he can be gifted Nectar once per escape attempt. However, he lacks an Affinity level.

Bouldy does not have a Codex entry.

After the player has conversed with Sisyphus a number of times, Zagreus becomes able to have "conversations" with Bouldy and can even gift him Nectar. Thereafter, he can be gifted Nectar once per escape attempt if Sisyphus' room is encountered. Doing so rewards the player with the Heart of Stone boon, which rewards a random buff when acquired. Though the boon offers modest stat increases it can be useful if the player has excess Nectar, as it is the only mid-run benefit one can receive by spending Nectar. The boon can bestow one of the following effects: 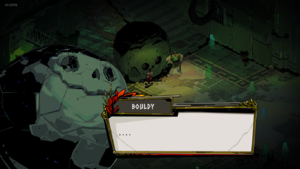 Bouldy "saying" something in response to Zagreus' chatting with him(?), upon Sisyphus' suggestion.