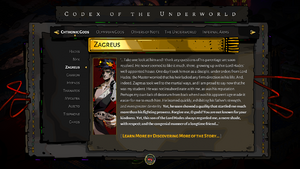 The Codex, which is open on Zagreus' entry.

The Codex of the Underworld is a book given to Zagreus by Achilles, containing information on the characters, creatures, and objects that exist in the Underworld and beyond. Achilles hoped that by giving the book to Zagreus, he could encourage the prince's love of history to grow, rather than only teaching him how to fight.

The Codex functions as a semi-magical record of Achilles' own travels and experience, both on the surface (e.g. with the Olympian Gods) and in the Underworld; therefore, it is not unbiased or objective, but is written from Achilles' point of view, and references his personal opinions, relationships, history, and understanding. As Zagreus encounters, gathers, speaks to, or slays the subjects of the Codex, he is able to access Achilles' knowledge more deeply, and the entries become more complete.

The Codex also serves as a reference of how many bottles of Nectar and Ambrosia have been gifted to certain characters, via a row of hearts in the top right corner of their entries. There are ten hearts in total, but for most characters, the highest heart levels are currently locked and unavailable.

Though the Codex is obtainable at any time after Zagreus' third escape attempt, Achilles may not hand it over right away - multiple conversations may be required to trigger the correct event. The Codex cannot be opened prior to obtaining it.

The Codex currently contains the following headers and entries (click to expand; click through to individual pages to read):

The sections of the Codex are ordered in different ways.