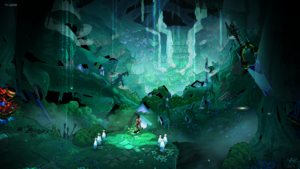 Zagreus standing over the fields of Elysium.

Elysium (also known as the Elysian Fields) is the section of the underworld reserved for those who were great heroes or particularly beloved by the gods in life. It is seen as an eternal paradise, where warriors, heroes and kings relive their living days by engaging in recreational combat. Elysium is filled with ageless crystal structures and statues depicting various heroes, all overgrown with moss. The river of forgetfulness, Lethe, flows through the area, numbing the memories and old pains of the shades who reside there.

Elysium is the third biome Zagreus encounters in his escape attempts, and is always 11 chambers long (Elysium will always end with a Stairway chamber in the 37th room of any run.)

The traps of Elysium act differently than the traps from previous levels, and can be used more offensively than the ones in Asphodel and Tartarus. Elysium features a variety of traps.

One of these traps are the regrowing Phoenix Eggs. Like the explosive barrels in both Tartarus and Asphodel, these eggs can be primed by Zagreus (or by the projectiles from other traps) to explode, dealing high damage to anything caught within the radius. Unlike the barrels, these eggs will eventually regrow in the same spot, thus they can be reused to deal damage to enemies (and serve as a constant threat)

Elysium also features automatic firing Crossbow traps. These traps will automatically fire slow moving bolt projectiles across the room, which deal high damage to enemies (or Zagreus) if hit. These bolts can trigger the destruction of Phoenix eggs, and are set up in some rooms to deliberately do this. However, these bolts can be deflected or blocked by Zagreus.

Finally, Elysium features hoplite statues which line some of the walls of its chambers. Anything that stands directly in front of this statue will be attacked by its spear (after a very brief delay) dealing moderate amounts of damage. Rows of these traps often form a shield wall along the outer edges of the chambers, and occasionally appear around the centerpieces of rooms as well.

Another thing to note, while it is not necessarily a trap, is the wall pillars in Elysium will regrow over time after being completely destroyed, similar to the Phoenix Eggs. These can be used to repeatedly bring down rubble on enemies, dealing high amounts of damage.

Elysium features a unique chamber with the shade Patroclus, who can be found reflecting moodily on a bench overlooking the River Lethe. When encountered, Patroclus will offer Zagreus a brief conversation, and then grant him an amplified item from the Well of Charon. Patroclus will always offer a choice between these 3 items:

Patroclus can only be encountered one time per run, and is not guaranteed to be encountered. Zagreus cannot use Fated Authority on his chamber to swap it to a different reward. Patroclus's chamber will not count towards Encounters for Chaos boon debuffs, but it will count for specific items from the Well of Charon (like the HydraLite or HydraLite Gold).

Elysium features two separate mini boss encounters. Zagreus can encounter only one of them in a run. It is possible to encounter neither of them, depending on the paths the player takes.

Both rooms are marked with an elite skull beneath the offered god boon. There is no way to distinguish between the two encounters without entering one.

The first mini-boss encounter in Elysium is a fight with a Dire Soul Catcher. The room will spawn an Elite Soul Catcher in the center, surrounded by pools of the River Lethe. Elite Exalted will begin to spawn in the room, but will spawn in unarmed. Their weapons will appear around the room, and they will attempt to rearm themselves during the fight with the Elite Soul Catcher. While the Exalted spawned in eventually have a cap, they can very easily overwhelm a player if not dealt with while taking care of the Soul Catcher. Once the Soul Catcher dies, Exalted will stop spawning. The encounter will end when every enemy has been slain, including any Exalted.

The second mini-boss encounter in Elysium is a fight with Asterius, the Bull of Minos (more commonly known as the Minotuar). Asterius' chamber is always a small arena with 2 wall pillars in it. Unlike other mini-boss encounters in Hades, Asterius will have a health bar, and will become briefly invulnerable at 50% health, after which he will gain new attacks. The fight with Asterius will end at 20% health, where he will become invulnerable again and call off the fight, complimenting Zagreus before leaving the chamber through the exit door. After he leaves, the god boon will be awarded.

More details on Asterius' attacks can be found on his respective page.

Elysium features one final boss: Theseus and Asterius. This boss will appear at chamber 36. This boss is unique in that the player is fighting two separate boss entities at one time.

The reward for this encounter is an Ambrosia Bounty if it is the player's first victory against the Heroes, or if they meet the Target Heat from the Pact of Punishment. Otherwise, it is a Darkness drop. By default, this drop is 120

Once the Heroes are defeated, the back entrance of the stadium will open, which leads to a Stairway encounter. This stairway will always lead to The Temple of the Styx, the final biome of the game.

These are all the enemies that can be encountered in any other Elysium chamber. Most of these enemies can also appear as Elites, giving them armor and upgraded attacks.

One enemy type that is worthy to note are the Exalted. These come in various classes with different weapons. However, all Exalted are merely separated from their weapons when killed. Disarmed Exalted Souls will attempt to re-arm themselves by traveling to a nearby weapon, and performing a short channel on it. If successful, it respawns as an Exalted of that weapon's type, with full health. Exalted of any type can re-arm with any weapon, and thus swap their weapons mid combat.

It is important to note that Disarmed Exalted Souls have very low life amounts, and have no attacks. Their channel on a weapon is also interrupted by a weapon's stagger effect, knockback, and stuns. (Assuming they are unarmored.)

Elite Exalted will be disarmed as Elite Disarmed Souls, giving the soul armor. If it rearms with armor, it rearms as an Elite Exalted of the weapon's type. If it only re-arms with health and no armor, it will rearm as a normal Exalted.

For additional information on Elysium that does not pertain to Hades, see Wikipedia's article: Elysium