From Hades Wiki
Jump to: navigation, search
Wiki.png
Welcome to the

Wiki
The Hades guide written and maintained by the players.
Please feel free to contribute by creating new articles or expanding on existing ones.
About Hades 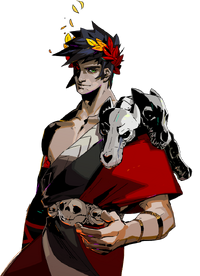 Hades is an early access roguelike game from Supergiant Games, creators of Bastion, Transistor, and Pyre. You play as Zagreus, immortal son of Hades, on his quest to escape from the underworld, fighting through many angry lost souls along the way. Death is a mere inconvenience for Zagreus, returning to his room in Hades' palace each time to reflect in the Mirror of Night and try again. Receive Boons from the other gods of Olympus and find treasures to aid in each escape attempt.
[Read more...]
Items

Our third Major Update of the year has officially arrived, and it's our biggest ever, chock-full of new content across the board!! Thank you for playing, and special thanks to our beta testers for helping us get here. Expect a follow-up patch soon to address any lingering issues, and then... onward to our v1.0 Launch!

Well of Charon & Other Items

Quote of the Patch

How to help
See how you can help contribute to Hades Wiki! Remember to maintain a standard for grammar and punctuation in your contributions, please.

Register
Register an account to keep track of your contributions.

Main page sections: 1 · 2 · 3 · 4. Changes for the main page can be proposed here.
Retrieved from "https://hades.gamepedia.com/index.php?title=Hades_Wiki&oldid=3210"
Categories: