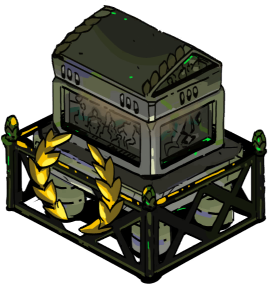 Treasure chests worth more the faster you slay the foes guarding them.

Infernal Troves are chests that may occasionally be found in the underworld. They most commonly contain

, but can sometimes contain

Infernal Troves cannot spawn in the first chamber of a biome, in a boss room, or in the chamber immediately following a boss. They will also not spawn in consecutive chambers. They do not spawn naturally in the chambers in Temple of Styx. A Trove Tracker can override these conditions and cause a Trove to spawn regardless, where possible.

In addition to its intended reward, an Infernal Trove can drop a Nectar at a rate of 5% when all the spawned enemies are killed.