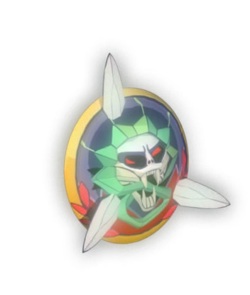 Aegis, the Shield of Chaos is an Infernal Arm that can be unlocked for 3 Chthonic Keys.

The main attack is a single swing that hits in an arc and knocks enemies back. Holding the attack button will block damage from the front, and releasing will perform a shield bash forwards, dealing damage to enemies hit. The special throws the shield, which bounces between enemies and objects before returning.

The Shield of Chaos has 4 Aspects: Zagreus, Chaos, Zeus, and Beowulf. Like all other weapons, each Aspect has 5 levels that can be unlocked by spending Titan Blood. An Aspect will not only change the appearance of the Shield of Chaos, but will also improve its attacks. The higher the level of the Aspect, the more effective its improvement is.

*Blitz Disc will move through foes until stopping in place for 10 seconds or until Special is pressed again, at which point it travels back to Zagreus. Deals damage every 0.3 Sec., even when travelling back. You can still Attack before the shield is recalled.