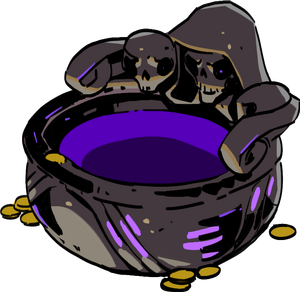 The Well of Charon is an interactive shop that can be found in the Underworld. Temporary buffs can be purchased at the well to assist escape attempts.

Wells will not spawn during the first run on a new save, nor will they spawn in the first four chambers of Tartarus. They will also not spawn within two chambers of each other, or three in Tartarus. A Well of Charon is guaranteed to appear in the room immediately following a boss.

Charon's Bone Hourglass increases the duration of Well items purchased after equipping the keepsake by an additional 4, 6 or 8 encounters, depending on the keepsake's level. The Loyalty Card, which is obtained by defeating the boatman in a mini-boss fight, will reduce the prices of Well items by 20%.