From Hades Wiki
Jump to: navigation, search
This article is a stub. You can help Hades Wiki by expanding it.

The second available chamber in the House of Hades, this cluttered room was the Prince's bedchamber before he began his futile attempts to escape. The room contains an imposing mirror, an empty desk, a large bed, four bookshelves, two chairs, two overstuffed chests, and miscellaneous clutter. Notable among the clutter are three massive skulls, accompanied by a smaller skull and a display board of an additional six smaller skulls. They appear to resemble the skulls of Cyclopes, Gorgons, and some large-mawed beast. The player can choose to add more to this room by purchasing decor from the House Contractor using Gemstones.

The Mirror of Night[edit | edit source] 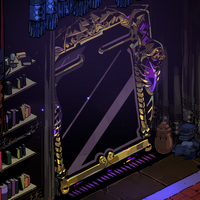 The Mirror of Night in Zagreus's room.

Dominating the top-left wall of Zagreus' room is the Mirror of Night, a rectangular slab of non-reflective gloom several times Zagreus' height. It has a beautifully gilded golden frame embedded with gems of crystallized Darkness. One might presume that the whispers one often hears in Zagreus' room stem from this item. 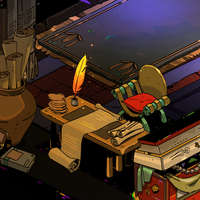 Zagreus' desk after receiving the Fated List of Minor Prophecies.

A finely crafted desk on the left wall of Zagreus' room. It appears with three scrolls of parchment, an ink pot supplied with an over-sized orange feather, and what seem to be several dishes from previous meals. After purchasing the relevant upgrade from the House Contractor for 20

, this desk will become adorned with the Fated List of Minor Prophecies. 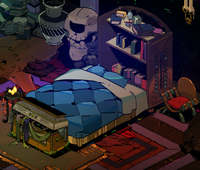 Zagreus's bed in his room.

This well-made and surprisingly tidy bed dominates the right side of Zagreus' room. Though imaginably quite comfy, Zagreus will typically refuse to sleep, ever-focused on his next escape. It receives the same response that chairs elsewhere in the house are given, humorously implying that Zagreus would rather sit on it rather than lay down. On certain occasions, Zagreus will state that he wishes to lie down. As Zagreus dreams, a flashback sequence will begin.

The Scrying Pool in Zagreus's room.

. It retroactively records the number of escape attempts and foes killed in the current save file and will update after each attempt. After its purchase, it will appear in Zagreus' room next to the exit to the courtyard, after a brief quip from the narrator. Zagreus will then remark that he's wanted one of his own for some time. 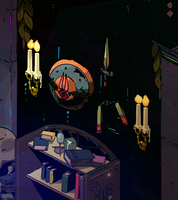 The Trojan Arms in Zagreus's room.

The assorted weaponry, leftovers from the Trojan War that found their way into the Underworld, is an item available for purchase from the House Contractor for 200

. It decorates the space above Zagreus' bed. Displayed there include a bronze shield emblazoned with the crest of Hades, a bronze dagger with a decorated crossguard, and strangely enough - a pair of nunchucks. Zagreus remarks that the mortals who created these weapons had the right idea, though their products are on the crude side. 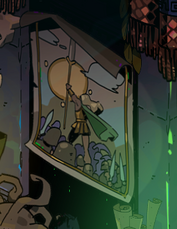 This illustration of the valiant hero Achilles, from his days as commander of the Greek forces during the Trojan War, is an item available for purchase from the House Contractor for 60

. After its purchase, it will appear in Zagreus' room between the mirror and the exit to the courtyard, after a brief quip from the narrator. Zagreus remarks that his mentor "must have been incredible back then".

This full-body illustration of the lovely goddess Aphrodite, in her full splendor upon first arriving at the island of Kythera, is an item available for purchase from the House Contractor for 120

. After its purchase, it will appear in Zagreus' room between the exit to the courtyard and his bed, after a brief quip from the narrator. Zagreus then wonders if he could get it signed.